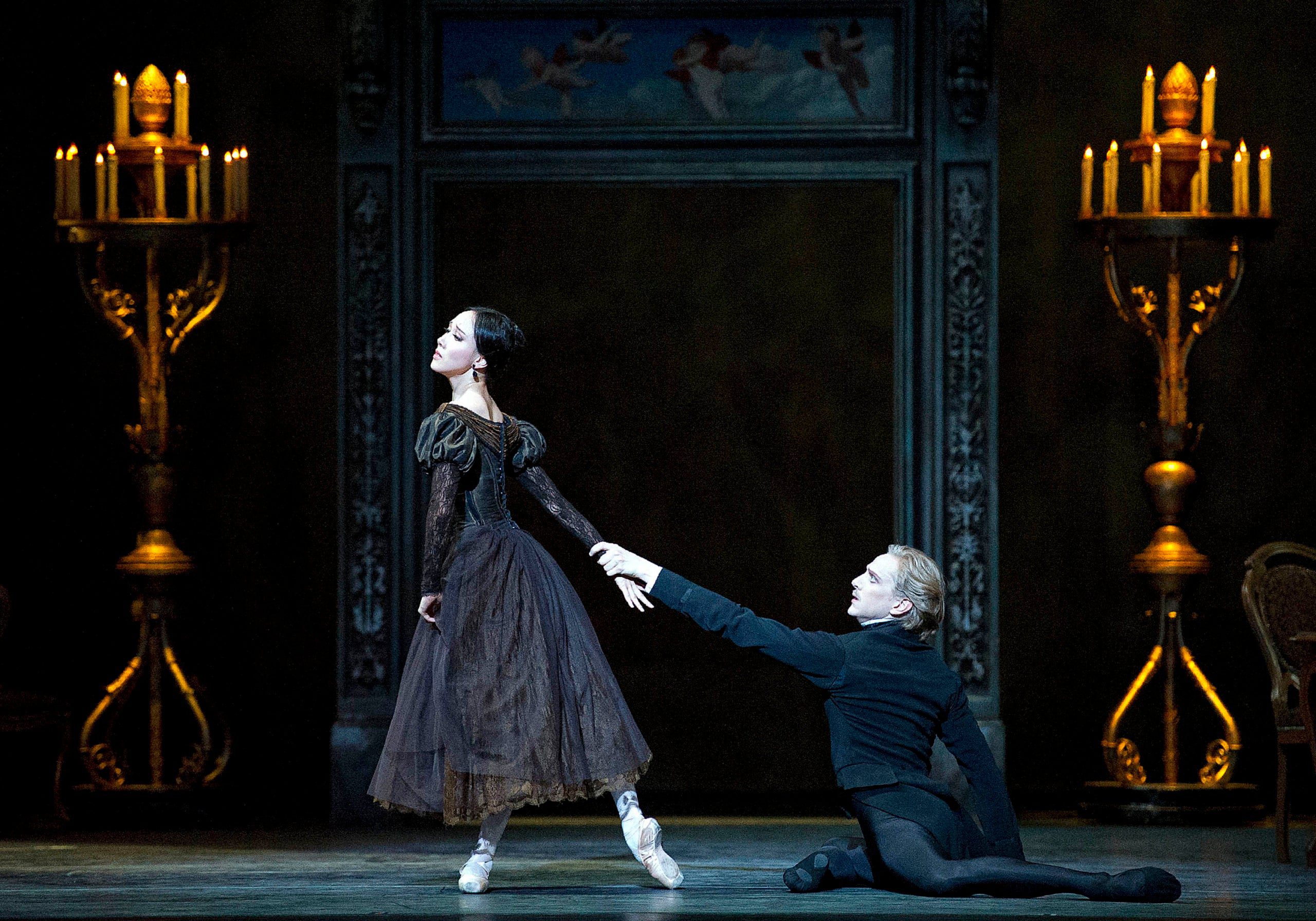 “Tatiana, dear Tatiana! / I now shed tears with you. / Into a fashionable tyrant’s hands / your fate already you’ve relinquished. / Dear, you shall perish; but before, / in dazzling hope, / you summon obscure bliss, / you learn the sensuousness of life, / you quaff the magic poisons of desire…”

With affection, empathy, and a tinge of regret, Russian writer Alexander Pushkin (1797-1837) described in his celebrated novel in verse Eugene Onegin a troubled romantic predicament of its main heroine, Tatiana Larina. “A fashionable tyrant” in question is the novel’s title character, Onegin, a wealthy young man from Saint Petersburg—arrogant, cynical and disdainful—who can’t quite figure out what to do with his life and is suffering from a severe case of apathy and boredom.

After inheriting a country estate, courtesy of his late uncle, the city-sophisticate Onegin finds himself deep in a rural province, where he meets a young poet, Vladimir Lensky, and the Larins family, including their sixteen year old daughter Olga, to whom Lensky is betrothed, and her older sister, Tatiana. These four personages—their interactions and their personal stories and destinies—form the narrative and dramatic core of Pushkin’s novel, which is regarded as one of his masterpieces.

With his high-society manners and good looks, Onegin is surely a catch. And it takes only a moment, or rather a glance, for the naïve and innocent Tatiana to succumb to his many charms. For her, this is love at first sight. Her romantic infatuation with Onegin is sudden, absolute, and absolutely unprovoked. The young dandy is too self-absorbed and narcissistic to appreciate her feelings. He is thoroughly displeased and irritated by the unglamorous and monotonous country life, having nothing but disdain for his neighbors—the Larins in particular—and their primitive social life style and quaint traditions.

Yet the impressionable Tatiana, under the influence of too many romantic novels, finds her heart aflutter and proclaims her irrevocable love for Onegin; and she does so by writing him a letter. “I am yours!” she tells him—a brave and dangerous statement for a young woman of honorable reputation at that time. Yet Onegin is totally unmoved by her love confession. When they meet at her name-day celebration, he scorns Tatiana for her impulsiveness and indiscretion. He tells her that he isn’t a marriage material, in fact, he simply doesn’t wish to get married at all; and then, as if to drive a nail deeper into the wound, he admits, rather mockingly, that if he were to consider nuptials—she would be his first choice for a bride.

After giving Tatiana a harsh lesson on “how to control emotions,” Onegin leaves her in total distress and tears and proceeds to entertain himself by intentionally flirting and dancing non-stop with her sister thus hurting the amorous feelings of his sensitive friend, Lensky, who is just two weeks shy of his wedding bliss with Olga. Outraged by Onegin’s “disrespectful advances” toward his fiancée, and obviously upset by Olga’s perceived betrayal, Lensky challenges Onegin to a pistol duel, subsequently loses it, and dies.

After killing his friend, Onegin abandons the country altogether, spending a few years abroad. When he returns, mature and wise but just as indignant and unsatisfied with his life as before, he meets Tatiana again. To his total surprise, she is no longer an impressionable country girl but a glamorous and rich society lady—admired, respected and loved—gainfully married to a prince. And it’s here that the tables turn as Onegin, overwhelmed with desire and passion, begs Tatiana for her love and forgiveness, writing her one letter after another, pleading for her affection, but to no avail.

“I love you… but to another I belong: to him I shall be faithful all my life,” she resolutely tells him when they finally meet, ending his hopes for happiness and leaving him bitter with regret.

In 1965, choreographer John Cranko created a three-act balletic adaptation of Pushkin’s novel for the Stuttgart Ballet. He did so rather heavy-handedly, not only stripping the plot to the level of tear-jerking melodrama but also disregarding Pushkin’s artfully poetic style, as well as the irony, subtlety, and elegance of his storytelling.

Titled “Onegin,” the ballet unfolds as a series of highly-theatrical and hyper-emotional duets and solos for the four leading characters, spruced with a variety of ensemble dances for the corps de ballet shown as villagers and party guests. The ballet is accompanied by a medley of assorted pieces by Tchaikovsky (the score includes the excerpts from “The Seasons,” “Romeo and Juliet,” “Francesca da Rimini,” and other compositions) arranged and orchestrated by Kurt-Heinz Stolze.

Yet for all its sentimentality and over-the-top theatrics, “Onegin” is fast-paced and entertaining spectacle. It boasts a handful of plumb roles for the leading dancers and its physically intense, drama-laden choreography drills right to the heart of Pushkin’s tale, reinventing it as visually-gripping and expressive movement.

Over the years, Cranko’s “Onegin” has gained popularity among the audiences and the dancers alike, permanently settling into the repertory of many ballet companies around the world from Russia to Canada to Australia. In June, “Onegin” was part of American Ballet Theatre’s season at the Metropolitan Opera House in New York. I was able to catch the performance with David Hallberg in the role of the eponymous protagonist and Hee Seo as Tatiana.

If in Pushkin’s novel, Onegin is the main pillar of the story, in Cranko’s ballet, we witness the unfolding drama through Tatiana’s eyes. She is at the center of the action from start to finish. Lissome and graceful, Hee Seo felt right for the role from the very first moment she entered the stage. She beautifully conveyed Tatiana’s introverted character and her girlish vulnerability in the ballet’s opening scene, when we first saw her, with a book in hand, at her house, surrounded by her family.

When she met Onegin, her heroine became immediately entranced by the enigmatic stranger, her quicksilver bourrées fluttering with excitement and anticipation. In the famous “mirror” pas de deux—the first romantic encounter between Tatiana and Onegin that happened in her dreams—Seo was exquisitely expressive, her yearning arabesques and deep swoons telegraphing the young girl’s longing and the inexorable rush of first love. Her heroine seemed utterly crushed by Onegin’s rejection. Devastated and lost, she looked as though the earth slipped under her feet. In Act III, Seo’s transformation from a provincial girl to a magnificent lady of status and wealth was thoroughly striking and believable. And when her visibly-shaken Tatiana ripped up in shreds and pieces Onegin’s letter and decisively pointed him to the door in the ballet’s final scene, we both celebrated her revenge and mourned her self-imposed loveless destiny.

As Onegin, David Hallberg was an epitome of a dashing Byronic hero. With his golden locks and exquisitely handsome features, he looked as if he stepped right from the pages of one of Tatiana’s favorite romantic books—irresistible, mysterious, and ardent. In the dream duet of the first act, his partnering was flawless and fervent. His passionate embraces, dramatic holds, and airy lifts encapsulated the very essence of Tatiana’s burning love for Onegin. Dressed in somber black, Hallberg was properly aloof and stern, when he confronted and humiliated Tatiana about her romantic declaration, tearing up her letter with chilling, soulless hostility. A devil incarnate, he clearly enjoyed playing with emotions of the clueless Olga and the thin-skinned Lensky, ruing their chance at happiness. In the ballet’s closing moments, with ample artistic insight, Hallberg showed his hero inner-rebirth. His Onegin was no longer a rich bad-boy but a wise and utterly unhappy man, who recognized his horrible mistake even if it was too late. His love confession to Tatiana looked genuine and heart-wrenching; their final farewell duet, full of punishingly frenetic movements, felt like a cry of two doomed souls, who realized that their love was forever lost.

Jeffrey Cirio gave a vivid, memorable portrayal of Vladimir Lensky. In Cranko’s rendering, this character comes across as an emotionally unbalanced and proud youth, with no restrain and self-control—a far cry from Lensky we know from Pushkin’s novel. Everything felt particularly over-exaggerated about this character from his untamed rage toward Onegin to his blatant refusal to forgive the wayward Olga. A wonderfully expressive dancer, with an admirable technique and lush expressivity, Cirio was especially poignant in his pre-duel solo, replete with deep back bents and lunges—the young poet’s melancholy soliloquy and his farewell to life.

As Olga, Skylar Brandt put too much sweetness into her role. Her heroine was beaming with joy whether it was warranted or not. Yet she was properly charming and exuberant in her duet with Lensky and looked totally smitten and absorbed while dancing with the devious Onegin.

Tall and handsome, Thomas Forster looked smashing in the role of Prince Gremin, Tatiana’s husband. His gorgeous looks and youthful appearance undermined Tatiana’s romantic dilemma and diminished the dramatic impact of her final scene with Onegin. In Pushkin’s book, the prince is an old military man, suffering from battle wounds. The faithful Tatiana, despite her love to the young and dashing Onegin, chooses to stay with her aged husband. In this production, however, the young and hunky Gremin seemed like a winning choice.

The excellent Ormsby Wilkins led the orchestra in a vibrant and colorful reading of the score. The music mirrored the surges of hope and regret, of adrenaline and melancholy and aptly highlighted the various moods that the dancers were trying to express.

Next
Let There be Light