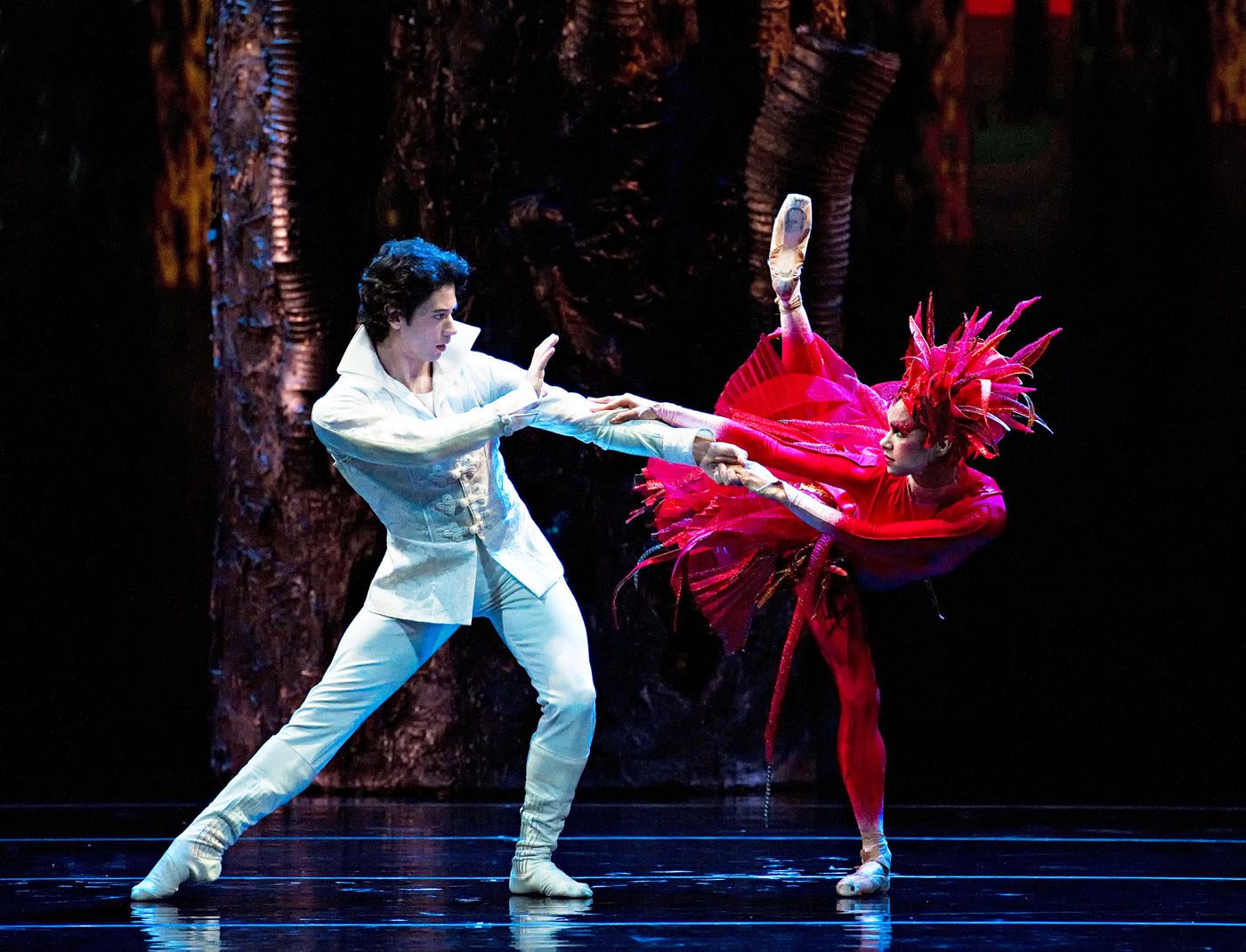 Some things are eternal, such as the music of Stravinsky, Shostakovich, and Bernstein. Alexei Ratmansky, one of the world’s greatest living choreographers, has made mostly astute and fascinating use of works by these composers in a program that also showed off the formidable talents of dancers from American Ballet Theatre as the troupe, in full-throttle dazzle mode, charmed Los Angeles audiences last weekend.

That the engagement kicked off with a gala performance featuring superstar ballerina, Misty Copeland, in the title role of Stravinsky’s “Firebird,” was a dollop of icing on the terpsichorean cake. Ratmansky, born in St. Petersburg and director of the Bolshoi Ballet from 2004-2008, has been an artist in residence at ABT since 2009. Turning 48 next month, the choreographer has, decidedly, been on a dancemaking jag.

While both his “Firebird” and “Symphony #9,” the latter set to Shostakovich, premiered in 2012 (the former has been reworked), Ratmansky’s “Serenade After Plato’s Symposium,” featuring a Leonard Bernstein violin concerto of the same name, had its first performance in New York in May. (Last year Angelenos also saw Ratmansky’s 2015 production of “The Sleeping Beauty,” as well as his 2010 “Nutcracker” and a “Cinderella” he made for the Mariinsky in 2002.)

It’s safe to say, then, that if ballet has had a major choreographic face since the turn of the millennium, it belongs to Ratmansky. Curiously, it was his “Firebird,” usually a musical and theatrical showpiece, that left a feisty, fiery Copeland with relatively little stage time. And, sadly, when she was front and center, she didn’t have much to do.

Yes, the charismatic Copeland has a tempestuous presence, her arms requisitely a-flutter and her jumps swoon-worthy. And her captor, Ivan, the divine Marcelo Gomes, who was first seen lying prone in the work’s prologue, partnered her with a modicum of fervor. But one longed for more.

Fortunately, there was more in the way of slightly tattered maidens, garbed in green, with emerald-colored wigs, to boot. (Galina Solovyeva’s gorgeous costumes also included feathery scarlet unitards and plumed headpieces and bustles). A plucky Stella Abrera danced the lead damsel with aplomb, and a devilish Cory Stearns, the sorcerer Kaschei, spewed smoke and looked as if he had stepped out of a Tim Burton film.

There were also plenty of free-range Firebirds, both men and women, cavorting amid Simon Pastukh’s mutable, quasi-psychological décor, a forest of thick, foreboding trees that, while sporting finger-like branches topped with crimson leaves, also emitted smoke, before morphing into a sumptuous kind of interior wall.

The full Ratmansky program was offered Friday through Sunday, with this reviewer attending the Sunday matinee. Shostakovich’s rousing ninth symphony, composed in 1945, was a fine musical fit for the continually shifting kaleidoscope of moves the choreographer devised.

Craig Salstein and Abrera began in a playful, allegro mood, executing off-balance steps and jumps, with Veronika Part and Alexandre Hammoudi dancing to the music’s second, lyrical movement. Then there was the astonishing Herman Cornejo, whose ebullient entrechats and airy leaps gave him a superhuman quality that sent the ballet careening into an assortment of astral directions.

The symphony, originally intended to be a celebration of the Russian victory over Nazi Germany at the end of World War II, became a tad political in the third movement, with the addition of George Tsypin’s backdrop of uniformed, red flag-wielding men amid a smattering of airplanes and dirigibles.

Accented by the score’s several marches (the symphony was conducted by David LaMarche), the work also featured an admirable corps serving up their best militaristic unisons. Keso Dekker’s costumes (dark halter frocks for the women, sleeveless tops and slacks for the men), added to the feeling of functionality, with Cornejo, whose pirouettes and bourrées could rival a Whirling Dervish and an Odette/Odile, respectively, helped give this work a range of emotions one might find in war, but are a lot less devastating and infinitely prettier.

Speaking of pretty, Ratmansky’s newest piece, “Serenade After Plato’s Symposium,” set to Leonard Bernstein’s 1954 violin concerto (played elegantly by soloist Benjamin Bowman and conducted by Wilkins), featured a septet of male dancers, each one able to project personality and heart into this neo-classical number. The men, a fleet-footed Jeffrey Cirio, the eminently watchable Gomes, Blaine Hoven, a noble Calvin Royal III, Gabe Stone Shayer, a regal James Whiteside and Daniil Simkin, who wowed with his speed and clarity, all danced with an engaging intensity.

The work also conjured the ideas of fellowship and camaraderie, a nod to ancient Athens when males were, ahem, clearly in charge. In Plato’s “Symposium,” the dudes also debated the nature of love, here marked by the appearance of a woman (Devon Teuscher, not projecting enough of an inner Goddess), who is left alone with Gomes for a brief, albeit less than lusty, interlude.

Still, the ballet, costumed by Jérôme Kaplan in an array of flowing vestments (he also designed the canvas suspended above the stage and emblazoned with the Greek word for symposium), did convey feelings—from familiarity and camaraderie to an aching loneliness—through gestures and articulated footwork in solos and various groupings.

The matinee performance ended with “Firebird,” the leads ably danced here by Isabella Boylston as Firebird, Cassandra Ternary as the Maiden, Hammoudi as Ivan, and Stearns repeating the role of Kaschei.

Lately, with tragedy and brutal killings becoming the new normal, it’s reassuring to know that one can step into a theater for a few hours and be swept away by beauty, grace and a breathtaking display of talent, allowing humanity to, once again, soar.