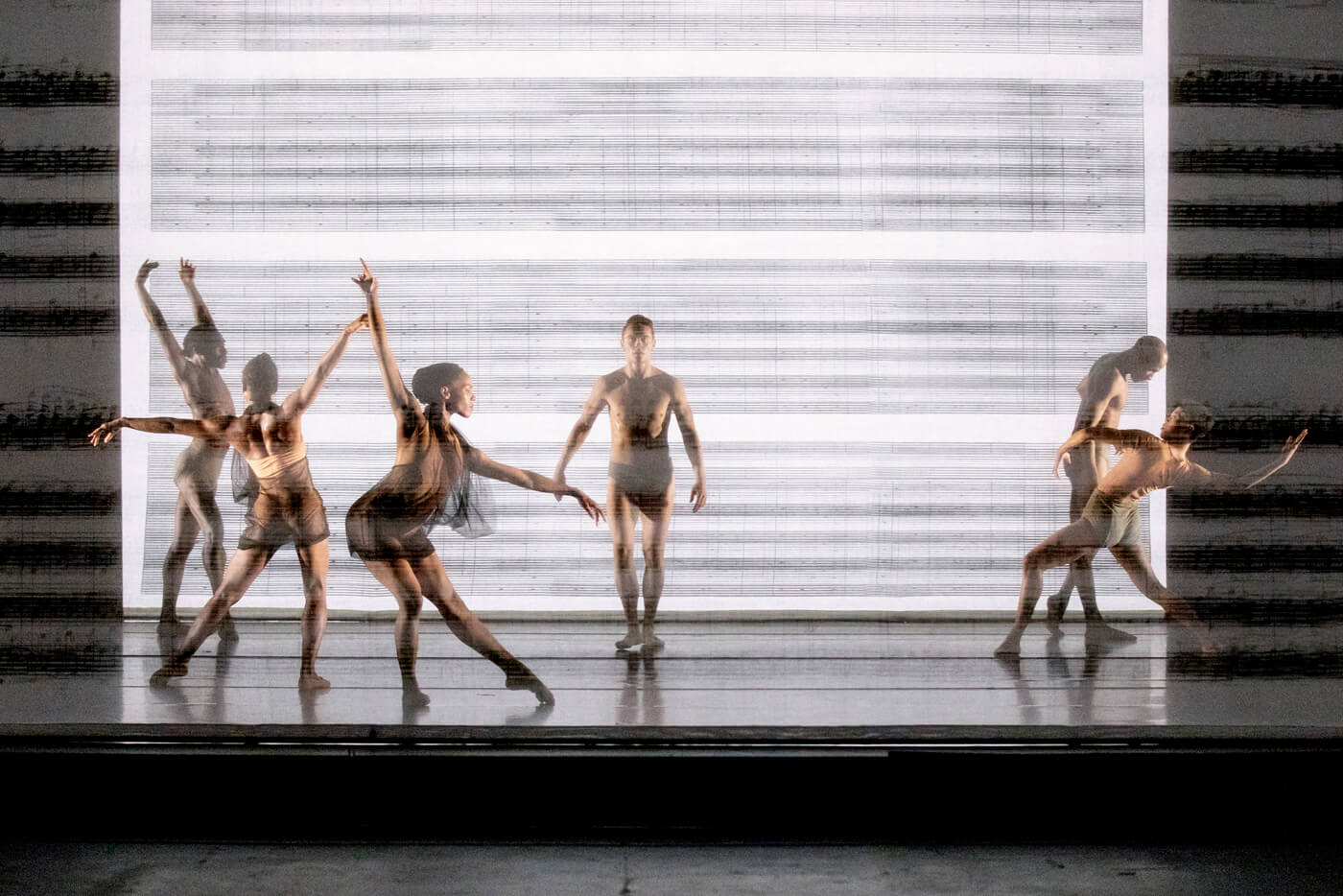 New York City Center’s 75th anniversary celebration gets more rollicking by the day. Alvin Ailey American Dance Theater is currently in a five-week residency at the theatre, where it is celebrating its own 60-year legacy. The season, titled Ailey Ascending, includes an impressive mix of works from decades past, and offers three world premieres as well as a company premiere. True to the billing, the newest works shone brightest. But Ailey’s great legacy loomed large over the proceedings, and it particularly informed Ronald K. Brown’s stunning new dance, “The Call.”

“The Call” is a layered tribute to Ailey—it pays homage to his choreography, his dancing, his biography, and his heritage. The opening movement, set to Bach’s Trio Sonata No. 6 in G, is particularly beautiful. The piece opens with a simple canon that follows precisely the voices in the score’s structure. The five dancers of the cast enter, singly or in a pair, from the top left corner of the stage and slowly step, arms out with bent elbows, to the downbeat of the Bach. Costume designer Keiko Voltaire clad the three women in long silk dresses in purple hues with black lace—the gowns resembled negligees. The two men wear khaki suits with black tank tops underneath. The calm stateliness of the music seemed radicalized by the dress and the dancers’ gyrating hips and elbow-intense arm movements.

The women skip and swish their skirts in the second movement of the piece, to the jazz music “Blues for Timme” by Mary Lou Williams. The men lose their jackets. But the elbow motif remains. The dancers often hold their arms up and bent in a casual T shape—as if to say, isn’t this easy? The third movement opens with a stunning solo for Vernard J. Gilmore, now shirtless and bathed in yellow-green light. The infectious Malian music in this section is sung by the Asase Yaa Entertainment Group; it was hard not to tap one’s toes in the audience.

As the movement progresses the remaining four dancers join alternately from the wings with a circular rocking chug step, one arm touching the chest with elbow jutting out to the side, the other arm extended out as if in embrace. They take turns repeating a motif from Gilmore’s solo passage—which includes karate chopping elbows to both sides followed by one arm falling from high along the centre of the body to the heart. By the time the wonderful Belén Pereyra-Alem performed it, adding a layout flourish, it was ecstatically moving.

Tsubasa Kamei’s lighting design shifted from spring green to red and then cut to silhouette as the dancers came into unison. When the lights went back up the cast gathered in a triangle in the center of the stage, echoing the opening of Ailey’s signature 1960 piece, “Revelations.” Brown succeeds in a marvelous feat in “The Call:” though the work explores stark dichotomies—day and night, life and death, the baroque and the tribal—it ultimately promotes the seamless unity of all things.

The company premiere of Wayne McGregor’s “Kairos” (a piece created for Ballet Zürich in 2014) shares some of “The Call’s” themes, but its main preoccupation is time. In ancient Greek the word “Kairos” means either the weather or the most opportune time to take action. The music, fittingly, was Vivaldi’s “The Four Seasons” re-composed by Max Richter. The curtain went up on a scrim of sheet music which blinked from opaque to transparent, exposing veiled dancers in strobe-lit, pizzicato freeze-frame. It was classic deconstructivism: for music and dance, mellifluous though they can be, are composed of finite moments. This was a neat effect, even if it went on for too long. The strobe petered out as the music slowed, and the dancers removed their gauzy tunics. The dancers were now stylishly outfitted (costumes by Moritz Junge)—the men in greenish-gray pants, and the women in trunks of the same color with tan long-sleeved tops. The stellar couple Jacqueline Green and Jamar Roberts danced a flowing, leggy pas de deux.

McGregor used changes in tempo, lighting, and imagery to play effectively with his theme. At one point an adagio passage for five men became a sharp, staccato dance. Their arms looked like the hands of a clock. Two men broke off from the group to dance together while the remaining three kept time with swinging pendulum arms (upraised, sweeping across the chest and pausing at the elbow) and struts forward and back. In another segment the dancers pounded on a wall at the back of the stage as if they had hammers, then sometimes they rested against it. It contrasted workaday time and break time. Tabulated drudgery vs. wandering dreaminess.

The wall lifted away and a bright work light descended. The dancers beheld its intrusion as if in a trance. Later the musical note scrim returned and flashed transparent for quick solos for a few dancers. Sometimes the stage was filled with frenetic group movements and then everyone would freeze except for Michael Francis McBride. The costumes changed again, some women were now in nude leotards with cowl-neck halter tops in sheer dark brown. A pretty adagio for Sarah Daley-Perdomo and Yannick Lebrun ended with her suspended in an upside-down split lit in silhouette, as if they were clock face frozen at 10:20. The sets and lighting by Idris Khan and Lucy Carter respectively were an integral part of the dance throughout.

Daley-Perdomo and Lebrun’s pas led into a rambling, noodly section for the entire cast, with the curtain eventually falling on dancers still very much in motion. It was Einsteinian relativity personified. Time can feel elastic, pointed, or get away from us; but in the end there is no stopping its forward march. It was a powerful piece, and the best thing I’ve seen by McGregor. My one quibble was that a group dance for the women was clearly choreographed for pointe shoes, so the tick-tock precision of échappés, passés, and bourrés felt somewhat blunted in flat shoes.

These new pieces were the most exciting to me, but the Ailey dancers made a strong case for Twyla Tharp’s “The Golden Section” (from 1983, acquired by the Ailey troupe in 2006) as well. More so than American Ballet Theatre and even Twyla’s own company, the Ailey dancers seemed comfortable in her mixed vernacular—they shifted convincingly from boxing to hip hop to modern and ballet. They inhabited the many styles instead of play-acting in them. While I thought Tharp’s “In the Upper Room”(1986) looked dated at ABT’s gala this October, somehow “The Golden Section’s” gold velvet and lamé Hulk Hogan wear (by Santo Loquasto) and David Byrne music felt impishly fresh. Chalvar Monteiro, Jacqueline Green, and Danica Paulos all shone here, as they did in every piece in which I saw them. Though not in the Tharp, I also want to single out Ghrai DeVore for her magnetic intensity each time she stepped onstage.

And what of the company’s namesake and season honoree? Becoming Ailey, a lovely video tribute which played at the top of Friday’s show, attested that his influence was everywhere. And “Revelations,” his magnum opus set to traditional spirituals, was joyously executed later that night. In it, Akua Noni Parker and Jermaine Terry were spellbinding in their difficult partnering and à la seconde promenades in the “Fix Me, Jesus” pas de deux. One of the best moments of the evening was watching her ever so slowly release into a deep backbend in développé front while he supported her by one hand. And Riccardo Battaglia, Samuel Lee Roberts, and Christopher R. Wilson were explosive in the “Sinner Man” section. Clifton Brown made every second count in his poignant solo “I Wanna Be Ready.” It was everything Ailey’s way too literal “Love Songs” (1972) solo—also starring Brown—wasn’t the night before.

By the time the women of the company hilariously fanned themselves onto the stage in bright yellow dresses for the “Revelations” finale it appeared that everyone in the cast was having a ball. But even amid the big, rousing group dances it was Ailey’s nuanced accents that showed his astuteness and importance as a choreographer. The ladies’ gestural hands holding flashy fans pulled focus, but the real character study lay in their resting arms: placed midway up their backs, palms flat against their ribs, elbows sharply akimbo. (What a night it was for elbow innovation!) The women looked proud as peacocks and also braced against pain. It was a minor detail that masterfully evoked all of African American history.