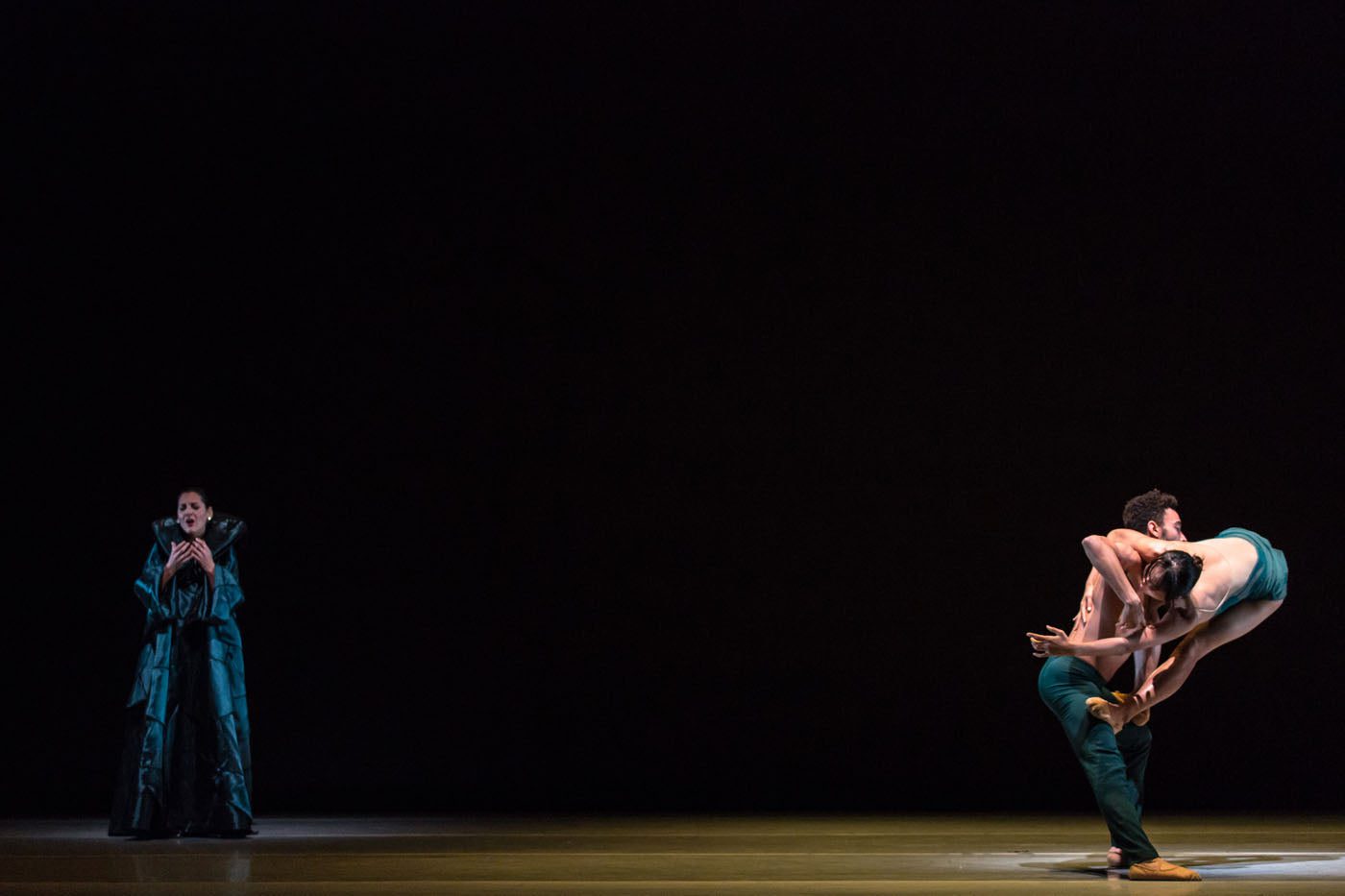 It happened six days ago; it happened in a different age. An age in which we believed a racist, misogynist sociopath like Donald Trump could never be president. The audience at San Francisco’s Yerba Buena Center for the Arts Theater rose immediately, en masse, and poured forth solemn, awed applause for the LINES Ballet dancers.

We were not applauding technical skill or physical virtuosity, per se. We were applauding an overflowing 90-minute outpouring of generosity, vulnerability, and naked interdependence that happened to manifest in flinging, flailing, and spinning in sometimes elegant, but more often awkward, contorted positions.

Anything I can offer by way of backstory or comment seems trivial now. But experiencing the LINES dancers and their ovation, six days ago in that pre-Trump presidency age, I thought of when I first encountered LINES, 17 years ago, while the San Francisco-based troupe was on tour to Los Angeles. Skepticism of any dance company not based in New York City ran strong in L.A. back then, and probably still does. I remember the nervous astonishment at intermission, as dance diehards loitered near then-L.A. Times critic Lewis Segal to eavesdrop on his judgments. “You have to admit they’re amazing dancers,” I heard people twitter. And then, referring to Lines founder and choreographer Alonzo King: “He certainly does find the dancers!”

The L.A. watchers had it wrong. Alonzo King does not find the dancers. He shapes them. Or more accurately: He helps them shape themselves.

As usual, last week, LINES’s fall home season offered two long ballets separated by intermission, one a world premiere and one a revival. As usual, they were really pretty much the same ballet: same vocabulary, same yearning emotionality, same theme of interconnection. King essentially makes the same ballet over and over again (for 36 years now), inviting a notable collaborator, either musical or visual, to provide the frame for each new work. This season, the world premiere, “Art Songs,” gave us the aural spectacle of rising Israeli mezzo-soprano Maya Lahyani. The reprise, “Meyer,” gave us the visual spectacle of Jim Doyle’s luminous splashing-water set designs.

Lahyani strolled the stage throughout “Art Songs” in a dramatic high-collared coat designed by Colleen Quen, singing works by Bach, Handel, Schumann, and Purcell with chamber accompaniment on piano and violin. She was miked; I wondered why. She is one of the darkest mezzos I’ve heard, with a rich amber tone and very curious, scintillating diction—she draws out hissing “s’s.” She almost threatened to draw my attention from the dancers until Meredith Webster, in angelic white trousers and back-exposing tunic, took the fore to Handel’s “Dove Sei, Amato Bene?” Stately beyond her moderate height, possessed of centipedean back and arm articulation, she commanded our rapture mostly facing backstage, and in a solo of considerable more stillness than the typical frenzied King choreography.

A former LINES anchor and now ballet mistress, Webster was listed as a Guest Artist. She was, by a degree of qualitative difference, the most fully formed movement artist on the stage that night. But part of the thrill of watching LINES is to see the newer dancers in their stages of metamorphosis, and Yujin Kim and Michael Montgomery in “Art Songs’” climactic duet were creatures on their way to completion.

I will confess this duet did not rank for me among the greatest I have seen King produce. Perhaps my awareness of the dramatic context of its ever-stirring soundtrack, “Dido’s Lament,” caused my hesitation. “Dido’s Lament” is about the great queen bravely accepting the solitude of death. Kim and Montgomery’s duet, as with every King duet, was an unspooling of grasping and flailing, of push and pull, of one partner escaping and the other reaching in an infinite loop of need. Kim is still finding her way towards surrendering to each gesture. Often when she pushed her foot against Montgomery’s thigh, she seemed to waver between accepting the awkwardness or masking it. She must learn to experience the tension between the awkward and the beautiful, to embody it rather than attempt to act it. She will come along.

King’s ballets tend to age well, to balance and grow like good wines. “Meyer” was a stirring closer. All the reaching and shoving and contorting remains, but in response to bass player Edgar Meyer’s classical-Appalachian earthiness (heard recorded), King begins with Courtney Henry touching the ground as though to sift soil through her fingers. The streams of water that soon poor in the background, glowing with light (design by LINES cornerstone Axel Morgenthaler), align us with the elemental. This is one of King’s greatest ensemble ballets, driven by folksy rhythms and even, in a quartet for four men, infused with hoe-down shades of playfulness.

In the central duet, Madeline DeVries and Babatunji tossed cards at one another, Babatunji obsessively collecting them, a sad and endearing sight. Like Kim, DeVries is in development. She is small but hale, not as fragile as her predecessor, Laurel Keen. She is cuter, more corn-fed, and as of yet less unfurling in her movement. She will be her own dancer and that will be a joy to watch.

In the meantime, it was the men who most astonished in “Meyer:” powerful, space-devouring Jeffrey Van Sciver, charismatic Babtunji, and most of all Montgomery, whose center is held so high in his chest that he seems to live on his toes.

Much about LINES Ballet besides the dancers has grown since I began watching them 17 years ago. They tour internationally more than ever, and will visit Russia, many cities in France, Switzerland, and Canada over the coming year—and tour the US “red” states of Kentucky and Alabama. I find some comfort in this after the election of Trump. LINES embodies everything that America most needs now—honesty, beauty, vulnerability, connection. I have never been more grateful to Alonzo King and the artists he shapes.

Next
Nijinsky in Black & White