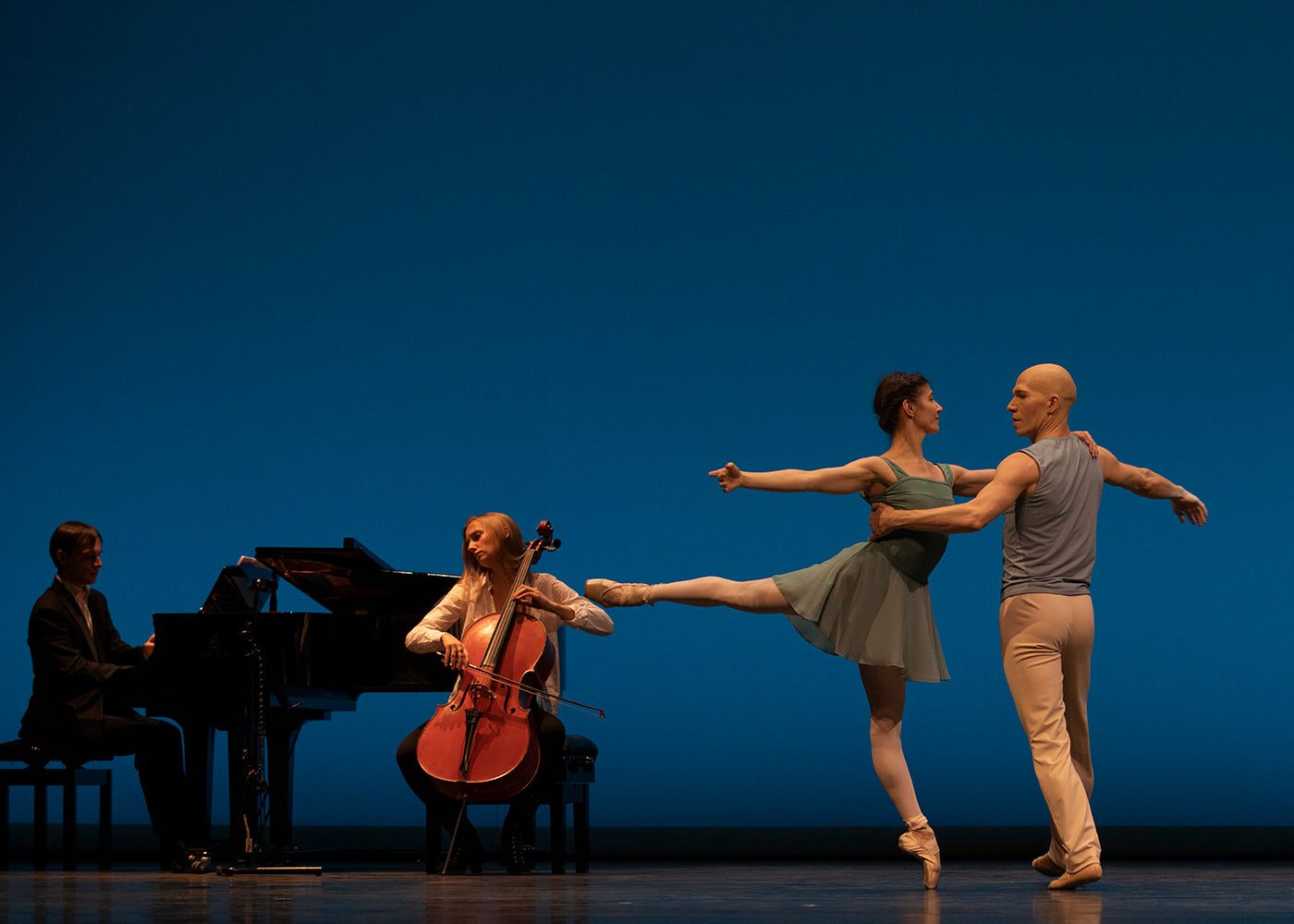 Alina Cojocaru’s technical fluency and stirring artistry have propelled her to starred ranks at both the Royal Ballet and English National Ballet. The Romanian luminary’s new self-assembled programme at Sadler’s Wells highlights this eloquence, taking a look at the many languages of ballet she’s perfected in her two decades on stage, from soft classical displays to exuberant contemporary tangles. Interestingly, there are no glimpses of Giselle or Aurora or the other marquee roles Cojocaru has built her name on; instead it’s mostly short pieces created on her in recent years, topped off with Frederick Ashton’s one-act “Marguerite and Armand”—a Royal Ballet mainstay, though not one she herself ever danced with the company.

The bill starts with a rip-roaring recital from violinist Charlie Siem and cellist Margarita Balanas, whose vigorous bow action belies the delicate resonance of their strings. Balanas sticks around to accompany a new duet between Cojocaru and Johan Kobborg, her long-term partner both on stage and off. “Reminiscence,” a piece they started with Tim Rushton years ago but only just finished, is a wash of luxurious extensions and fluttery port de bras, swaying embraces that get tighter as the music swells. It’s a little cutesy when they introduce curlicue hand gestures and other sugary affections, but the air is mellow, steadied by the calm, leisurely harmony of two dancers completely at ease with each other. There’s a private language at work here—you wonder how different it might look like if another, less intimate pair stepped in.

“Journey,” from young choreographer Juliano Nuñes, is another bright spot, a sultry trio with stretchy lifts and body-hugging Lycra. A catsuit-clad Cojocaru ricochets off Nunes and Dominic Harrison, diving into long splits as they rebound behind her. The premise is floaty—“life with all its ups and downs, stories and new beginnings”—but the delivery is far steamier than that implies: think hands streaking across mouths, thighs wrapped around necks and crammed against ears. Nuñes is as vivid a presence as Cojocaru, wending his torso with feline intensity.

Kobborg’s “Les Lutins” is a frothier confection. Cojocaru danced opposite Steven McRae and Sergei Polunin when this caprice debuted in 2009; here it’s Marcelino Sambé and Takahiro Tamagawa who compete for her affection, squaring off against two on-stage musicians. Sambé starts us off with quicksilver footwork, chasing the music’s swerves with hilarious arrogance. He sissones away in defeat, and in comes Tamagawa for another battle, shaking his head and refusing a handshake when he’s likewise pipped to the rhythm. Finally, we have Cojocaru, dashing in a lady-suit that’s miles more memorable than the choreography she’s given. Where the men whoosh, she prances; the set-up makes use of her flirty expressiveness way more than her virtuoso technique.

In between are two short films by Kim Brandstrup, one a dewy close-up of Cojocaru as she marks a piece in her head and the other a memo of her visiting her old ballet school in Kiev, recalled here with affection and formidability. Both linger on her gift for theatre, the ocean of sentiment she drafts with small twitches of her face: hope, dread, uncertainty. This talent is put to good use in “Marguerite and Armand,” the evening’s big set piece, which swaps the smiles and buoyancy of the routines above for wretched gasps on a velvet chaise longue. ENB principal Francesco Gabriele Frola is the brooding young love to her dying courtesan, furrowing his brow as they whirl through a whistle-stop tour of their erstwhile affair, our ballerina leaping from one exquisite frock to another. Their chemistry is fine, but it’s Cojocaru’s emotive talents that sing here—the drama she summons in her core and sends coursing through her spry, elegant limbs. Her despair finds a home in her curved neck and agitated leaps, bringing fire to a staging that otherwise lacks spark.

Next
A Bold Arrival