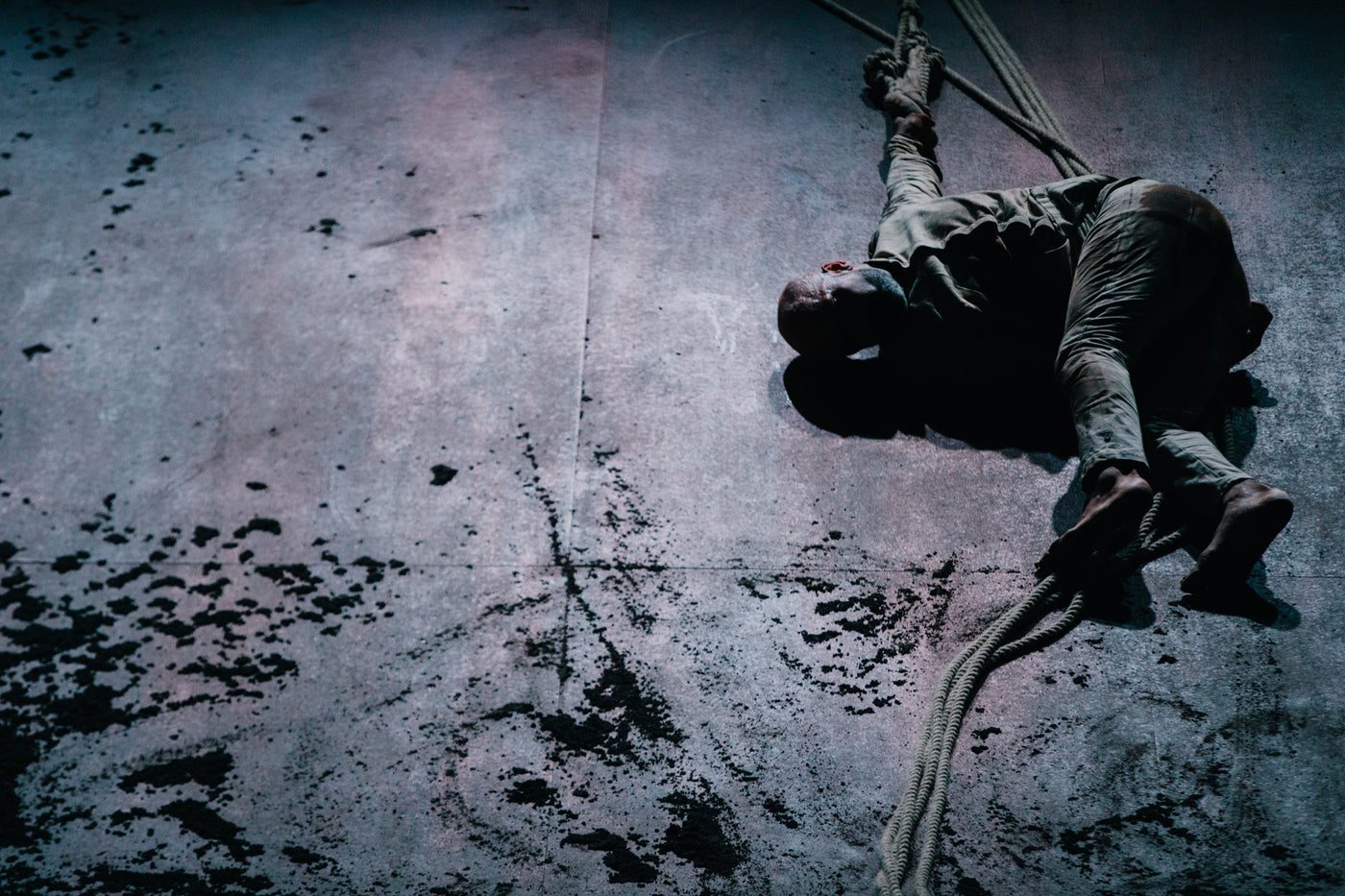 Drag Me To Hell

At once of the earth, and completely otherworldly, Akram Khan’s apocalyptic last-ever solo piece as a performer (or so he has stated) grips from the outset, and never lets go. From the minute he is spat out onto the stage, tied to a rope which renders him as vulnerable as a newborn tied to the umbilical cord, or prisoner yearning to break free, this piece of choreography is a snarling beast. It is a nightmarish vision of a state of being in limbo, inspired by Prometheus. “Xenos,” which translates as ‘foreigner’ or ‘stranger,’ stands for anyone ostracised, othered, or incarcerated during times of conflict, or simply overlooked, put down or racially abused.

Khan is the everyman, a symbolic representation of the face in the crowd or a name in the papers; the unknown soldier—one of many millions. Khan, whose feet fly as he fuses traditional Kathak, a form of Indian classical dance, with more contemporary dance models, embodies the struggle, a fight for survival in a hostile sloping environment. He whirls in circles like a mighty tempest, his hands attempting to scrub himself clean of blood and dirt.These hands are little tools, they claw at things, unseen, and sculpt shapes in the air. He scrabbles in the mud, restless, listless, absolutely solitary.

Divesting himself of the bells on his ankles, which provide percussion, he drapes them across his chest warrior style, and clings to ropes for ballast. The incredible set, an earthen coloured, earth covered slope designed by Mirella Weingarten, is genuinely dangerous. First a slippery obstacle course, then a cavernous place, it consumes not only Khan’s prone body, but everything in it—rugs, drums, and ropes on the round—all sucked up into an almighty maelstrom. Rocks start to tumble down, and there are shades of Pina Bausch’s threatening early stagings, a la “Café Müller” and “The Rite Of Spring.” Is it the end of days? What is left?

As the incredible, ghostly half-lit musicians onstage (vocalist Aditya Prakash, Nina Harries, B. C. Manjunath, Tamara Osborn and Clarice Rarity) whip up a cinematic postrock storm, and Jordan Tannahill’s whispered words speak of displaced peoples, blame and agency, and troubled continents, he is shot at, again and again and again. The gunshots become another form of percussion in the soundscape. Khan now has to re-emerge as a reborn figure. In a rare moment of hope and levity, he attaches the rope from an old-fashioned gramophone speaker to another rope, creating electricity (a visual pun, perhaps, on speaker’s corner?). In another, he is a leaping, creeping sculpture, fashioning a rope into a mask which covers his entire face. An innocent child at play, now free from constraint and restraints.

Yet for all of Khan’s dazzling movement vocabulary and strong narrative detail, the resulting feeling is one of slight detachment. Perhaps it is in part due to the unremitting violence of the gestures, repeated over and over, or the bleakness which threatens to suffocate. By embodying the many, there is a lack of focus in characterisation, therefore the nature of this performance is always elusive. There is as ever no faulting Akram Khan’s performance—he is still a wonderful presence and exceptional dancer—but due to the all-pervading nature of gloom, it is far easier to admire than love.