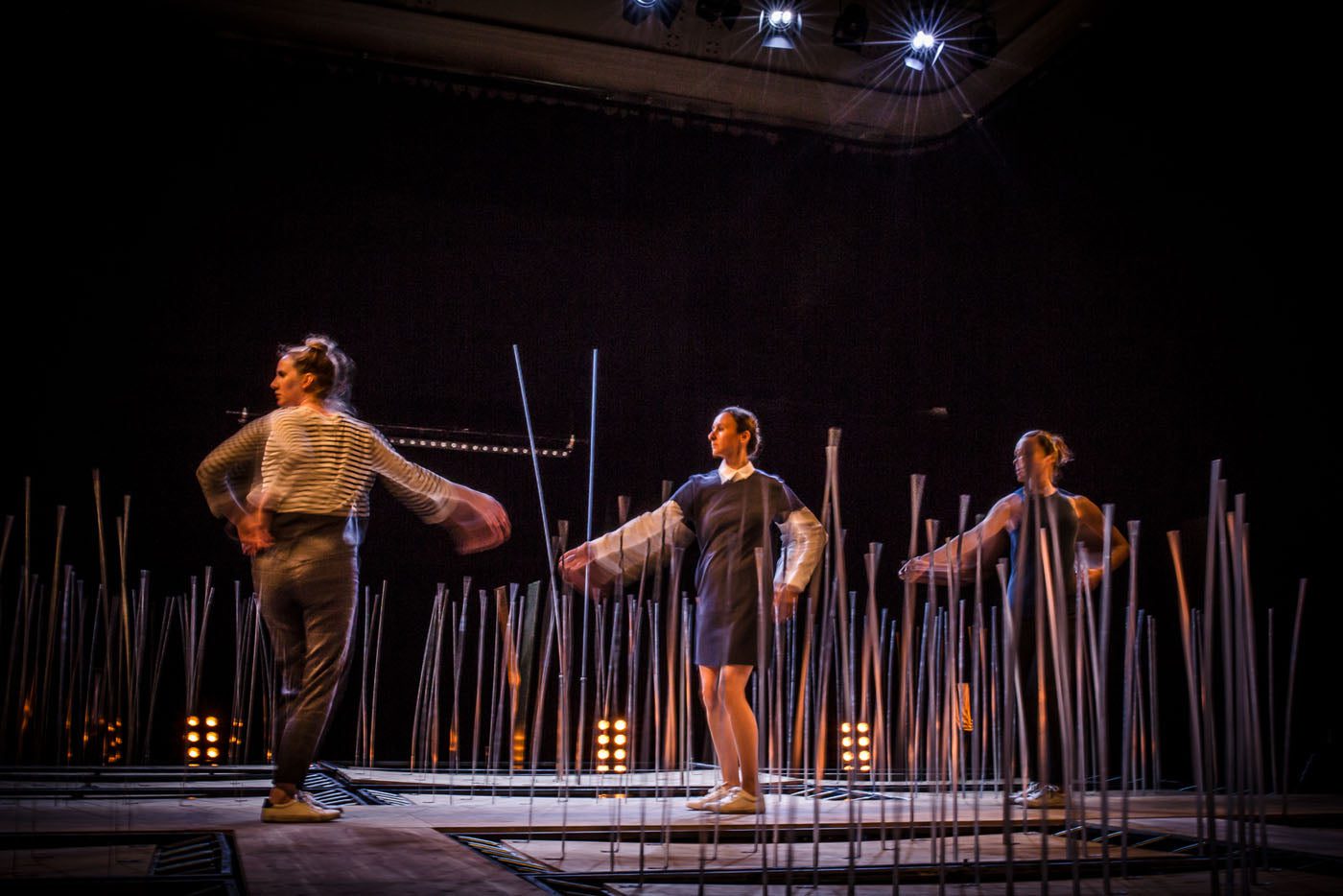 Darkly, silvered, a grassland of manmade forms grows. It grows in the North Melbourne Town Hall. It is, for now, neatly contained within the designated performance space, but like all things in nature, it is as predictable as it is unpredictable. This constructed grassland of “over 270 poles, strips, or sheets of aluminium, brass, copper and sprung steel”1 hums with life. Its presence felt from the moment I enter the space.

Two blocks make an imperfectly perfect grid. One block is comprised of nine shake tables, arranged in three ordered bands. The second block is longer, and it is comprised of six shake tables divided by two narrow pathways that lead to a central path. A central path in a metal wilderness is a safe place to get one’s bearings. As the grassland sings and shimmers, you’d be well advised to stick to the path; those rods have teeth and they are not afraid to bite. And perhaps like all things that can bite, it is beautiful to behold. A vibrating platform2 of interconnected wooden panels that simulate an earthquake, this is also a musical instrument, a living sculpture, a stage, and a potential disaster zone. Fashioned from timber and springs, it “is a kinetic sculpture and performance where vibration is heard through our ears, seen through our eyes, felt through our bodies, but understood with our imaginations.”3 Upon encountering it, I want to walk around this sculpture, to see it from all sides. To get up close and see how the light bounces differently off the varied components, but for this 360-degree picture4 I will have to use my imagination. I take my seat in the dark. I wait.

This feels personal. With choreographer, Ashley Dyer, I have spluttered and choked in the smoke (“Life Support,” 2013). With dancer, Nat Cursio I have sat cross-legged and built lego houses (“In the Middle Room,” 2014), grieved (“Recovery,” 2014), and sawn the legs off chairs (“A String Section,” 2015). This is personal, and yet not. This is bigger than me. In part, this work is a response to the 2011 magnitude 6.3 earthquake in Christchurch, New Zealand. Early on a Tuesday afternoon the ground shook so violently, killing 185 people and injuring several thousand.5 100,000 buildings were damaged, and 10,000 needed to be demolished. Tremor is, by definition, ‘a seismic shaking movement of the ground before or after an earthquake or volcanic eruption.’

Tremor by definition is also an ‘involuntary shaking of the body or limbs, as from disease, fear, weakness or excitement.’ Drawn from the Latin for ‘to tremble,’ it is not just the ground that can quake: a voice can quiver; a muscle can involuntarily convulse; you can experience a tremor of unease or delight. Tremor, here, serves as a springboard to the world at large and the world within the self. Tremor, here and on the page, is a build up of tension. In this work, that tension is poured into a single empty glass placed upon a small table between the silvered landscape and the huddle of the audience. Lit from above, the small table glows yellow. The glass will inevitably topple: will it break?

As principal dancer, Kristy Ayre, begins to whip her right hand back and forth in front of her face as she shakes her head left to right, I see not one pair of eyes but two. I see not one hand in motion, but a fantastical blur. I forget the glass, and I watch the two saw-like fronds at the foot of the platform as they make their swaying music. This repetition and softening of the edges is arresting to see and hear. Movement is creating sound, or is that the other way around? Life rule noted: moving in harmony with the instrument seems the best course.

Ayre is later joined by Cursio and Jo White on the (relative) safety strip within the ordered composition of metal whips. With legs placed slightly wider than their hips for stability, their appearance is not unlike watching a trio of commuters on the peak hour tram who cannot find a free handrail. They try to root their feet to the ground, but steadiness is hard to come by. One unexpected turn or sudden slam of the brakes and embarrassment, at best, ensues as you topple to the floor. Will you break? My own tremor of unease! Finding our own sense of balance relies upon what we see and what we hear; one only needs to try performing a simple balance with eyes closed or recall the last time water remained peevishly logged in your ear. Breaking the central axis of the body, Ayre, Cursio, and White are as strong and fragile as the glass.

Dyer is interested in the effect our actions have on the planet too, and so this is not just how the human form shakes when the earth quakes, but also a look at the stress we humans cause to the environment. And just like that, the former safety strip is no longer sturdy. Two oarsmen appear and take up their positions either side of the platform sculpture. Lindsay Templeton and James Hogan wield two formerly unseen levers, making the narrow strip sway from left to right. Part fairground amusement devoid of garish colour, part makeshift raft trying to stay afloat on the choppy high seas. This manmade natural catastrophe will not stop when you scream for it to do so; it will stop when it is ready.

It will stop when the glass falls on its side. Lights out.

(In something of own aftershock, driving home with a small side table in the back of the car, the unfastened furniture hums as the vehicle vibrates. Though not as loud, the sound is the very same. The performance, it seems, has not ended.)