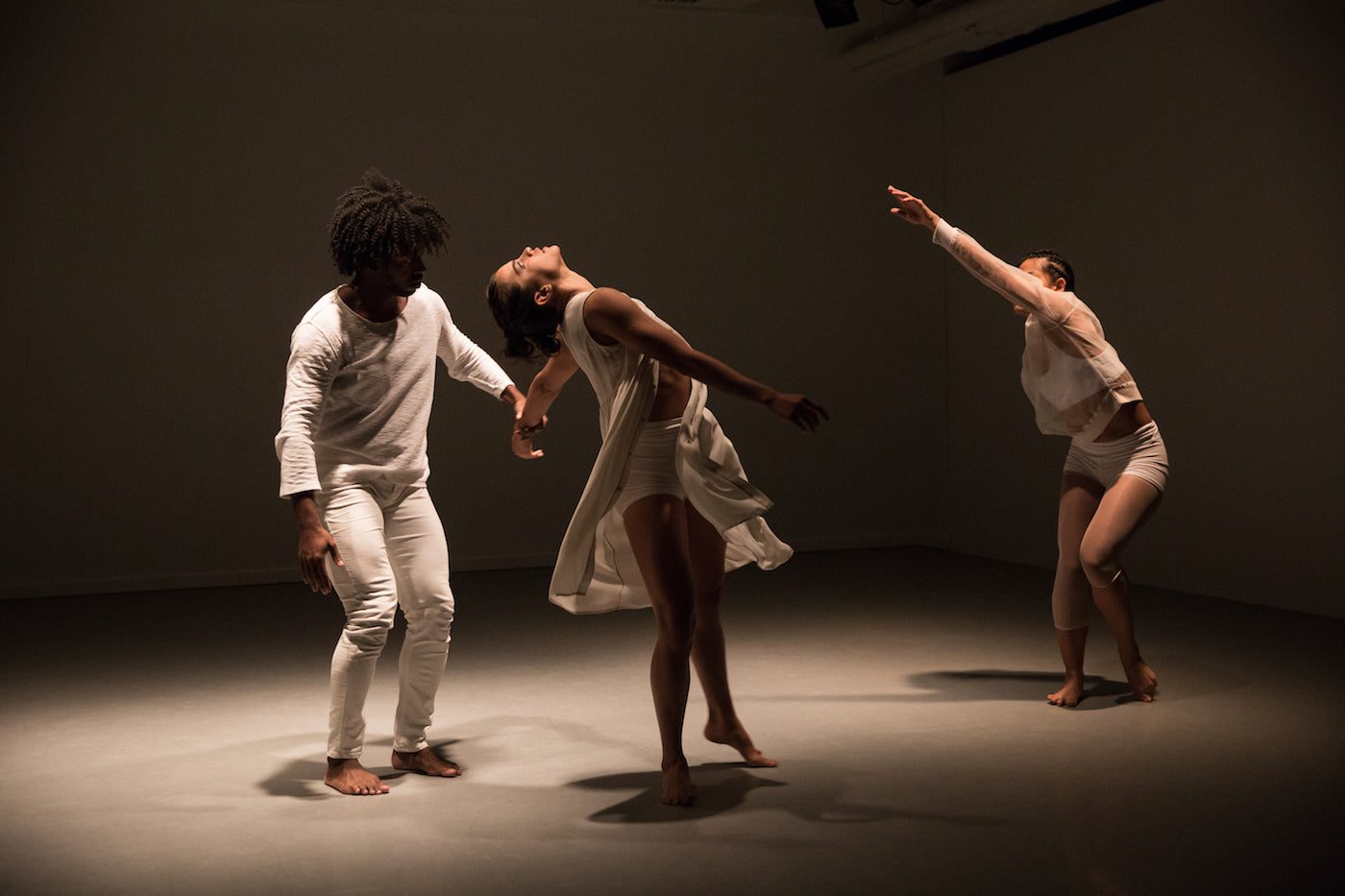 A Note on Movement

“A dancer’s intelligence,” writes critic Edwin Denby in “A Note on Dance Intelligence” (1944), “isn’t shown by what intellectual allusions she can make in costume or pantomime, or, if she is a choreographer, in her subject matter. It is shown by how interesting to look at she can make her body the whole time she is on stage.” When dancers deliver “interesting” movements, he explains, they can create different visual and, in turn, emotional experiences for audiences.

Choreographer Gina Gibney takes a cue from Denby in “Folding In,” her first evening-length work since 2013 and her first work for Gibney Dance’s Lower Manhattan space. Each of her company’s five dancers—Nigel Campbell, Kassandra Cruz, Amy Miller, Devin Oshiro, and Brandon Welch—is, according to Denby’s criteria, intelligent. Not only are their movements meticulous and measured, but the potential effects of these varied steps are profound.

The work begins with all five dancers migrating towards the back wall of the austere, minimalist studio. They take their first steps in the dark; only when lighting designer Asami Morita casts the space in a red glow do we get our first glimpse of the company. The performers, wearing white, engage with the back wall as if they were experiencing a roiling, fitful dream. They slap its surface, then sink to the ground; briefly, they look like victims of a firing line. Gibney forgoes musical accompaniment for this opening; audience members can only hear the swishing of a foot here, a hand there. Periodically, the dancers slip their limbs between their costume-clad torsos and the white wall and a raised leg or a craned neck disappears from view. The movement in this sequence is pained and frustrated. But is is also multifaceted: even though the back wall physically confines the dancers, it also seems to embolden them. They derive strength from slapping its surface and stepping along its border. Like animals who have realized they are in a cage, they are raring to escape.

Just as the audience is caught in the throes of this initial animality, the piece gives way to a series of more sensitive social encounters. Welch and Miller notably take a moment to hold hands and rest their arms around each other; she climbs on his knee, then he leans on hers. As the dancers move towards the center of the space, they tilt towards one another and cup the crowns of each other’s heads. Even when they spin each other on the floor, they are delicate. These movements cultivate a sense of care and support on stage that starkly contrasts with the dancers’ earlier focus on the barrier ahead of them; the dancers may face unseen demons, but these demons provide a common enemy. And fighting them requires solidarity.

Although the piece opens and closes with group dances, at the core of “Folding In” is a series of pas de deux. In each coupling, Gibney vests her dancers with a different movement vocabulary—and, in turn, primes the audience for different emotional effects. Campbell and Cruz, for instance, present one of the evening’s more pitched pairings. At one point, Campbell holds Cruz and spins her under a spotlight; then, they split, she turns away, and he stalks her.

The “most interesting resource for visual emphasis,” writes Denby, “is the heightened perception of the dancer’s body not in a line or silhouette, but in its mass, in its all-aroundness. A dancer can emphasize a passage in the dance by emphasizing the shape her body takes in the air.” Cruz and Campbell swap mass in this sequence. Campbell initially dominates the scene, but Cruz, calculated, soon tips the dynamic. Instead of shying away from her preying partner, she revolves around him, slowly, stalking the stalker. This is an act of restriction, not reverence.

And then, moments later, Campbell makes Cruz look weightless: he lays her to rest on her side, tucks in her knees, and then towers over her. When the couple returns to the stage later in the performance, this turbulence persists, with one difference: although Campbell is able to lift Cruz one more time, when he makes a move to grab her again, she steps to the side, evades his grasp, and walks off stage. This departing act actually emphasizes “the shape her body takes in the air” in the moments preceding this departure. In Cruz’s absense, the audience can still react to her.

Gibney also pairs off Miller and Welch for a number of couple dances. At the start of one encounter, Welch bathes under an orange light, his hands raised. He moves one of his arms with his other and appears to dip the manipulated limb into some imagined water well. He kneels, then rises, as if he were experiencing a sort of spiritual reckoning. Here, Welch—and, by extension, Gibney—creates a moment that is visceral but also spiritual. And this sense of examination and discovery only heightens when Miller joins Welch on stage.

In the shadow of Morita’s blue lights, Welch watches his partner, then moves in sync with her. The dancers step in time with a violin whose sharp notes create a sense of urgency. Miller, increasingly manic, jumps onto Welch’s thighs, and he spins her around his back. He then appears to dunk her into the same invisible well that he previously approached. A sound evocative of flowing water accompanies this apparent baptism. Gibney reaches for associations here, but she does so through gripping choreography. The sheer spectacle of Welch foisting Miller into the air, then into some invisible depths is fascinating, and when the pair rolls into its next pose—in which Miller stands on Welch’s right toes and clings to his arm, like she’s stranded on a rock amidst a lava flow—they solidify their status as dynamic, provocative performers.

Beyond these partner dances, Gibney uses group sequences as binding agents for “Folding In.” In one of these instances, the five dancers stand in a line, facing the audience. Each performer covers his or her face with one hand and drapes the other perpendicularly across the raised forearm. Here, the dancers appear to stand behind sacred crosses. Then, they pivot to the side and reveal their faces to the house. This animated iconography is another apparent reference to religion—and a moment in which Gibney’s choreography potentially clashes with Denby’s sense of intelligent movement. Remember, he is suspicious of pantomime. But even this apparent reference errs on the side of intelligence.

“There are many resources for visual emphasis in dancing,” he writes. These resources “draw the eye to one phase of motion rather than another, to one line of the body rather than another, or to the dancer’s partner, or else to her momentary position on the stage, or even to a moment in the music which sharpens our sense of her movement.” Here, the dynamic image of a cross is a resource. As Gibney’s dancers cross and pivot, they emphasize different planes of motion and layered lines. They also call attention to the fact that they are moving in sync; as in the beginning of the performance, the company conveys a sense of solidarity. And together, they are baring themselves to the audience—an action that contrasts with their more rambunctious, rebellious, and guarded state in the opening.

As the performance winds down, Gibney takes one more chance to highlight the dancers’ strength as individuals and as a troupe. The dancers, all on stage, split into two groups: one hovers near the wall while the other steps into the foreground of the studio. They mirror each other, then meld together. Punctuating these synchronized movements are a series of solos; while each dancer strikes a few steps alone, the other four dancers freeze. This support move frames the action for the audience.

In the dancers’ last act, they peel off, one by one, and fall to the side of the stage. This sequence seems, at first glance, to convey a degree of defeat. The dancers are turned away from the audience, and their silhouettes are reminiscent of empty shells. But this pose also radiates serenity. Gibney’s dancers have gone to battle—with their environment, with each other, and with themselves—and they have gained a sense of clarity and peace because of this experience. Or perhaps, in line with Denby’s logic, they vested the audience with a sense of clarity and peace.

In describing “Folding In,” Gibney notes her intent to explore “the natural impulse to extend beyond ourselves, to find purpose and connection, and to return to ourselves changed.” Her use of the word “natural” here seems to line up well with Denby’s emphasis on the physical aspect of choreography; in a dance performance, meaning can only derive from the body. In “Folding In,” Gibney delivers on her goal: her dancers seem to step on razors one moment and butter the next, and it is gripping to watch them respond to new encounters and environments.

Gibney also reinforces Denby’s claim that “interesting” movement can have an emotional, political, or intellectual effect on audiences. Although “Folding In” debuted on the eve of the United States presidential election, I saw the performance a few days after Americans woke up to a new president-elect. The range of emotions that Gibney’s dancers cultivate in “Folding In”—the rage, helplessness, melancholy, and resolve—felt at once more familiar and more biting that evening than they may have been on the performance’s November 2 premiere. For all of the surprises that the election doled out, Gibney seems to have unwittingly channeled the spirit of many Americans—and many New Yorkers—in the days following the country’s decision. Who will support you, Gibney and her dancers seem to ask? Who will guide you? Who will betray you? What’s in a partnership? What’s the price of independence?

These questions seem to become even more prescient when one considers the makeup of Gibney’s company. Her troupe is diverse, and the performers’ synergy, their harmony throughout the performance becomes even more meaningful when one considers the threat facing minorities across the country. Amidst an unpredictable, troubling, and mobilizing few weeks—weeks that have the potential to extend for years—the emotional thrust and physical power of Gibney’s work feel particularly relevant. Her performance has the potential to impact its audience, sure, but it also has implications beyond the Lower Manhattan studio’s whitewashed walls. And it is important that artists and benefactors like Gina Gibney continue to create performance pieces that have the potential to become conversation pieces. “Dancing is physical motion,” says Denby, “it doesn’t involve words at all.” Sometimes, words are secondary.